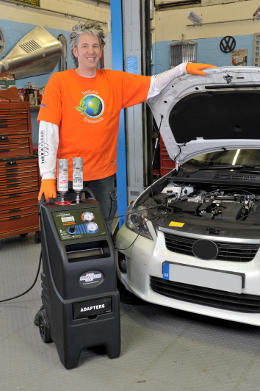 What is carbon build-up?

Carbon deposits are the by-product of combustion inside your engine. This build up will affect the efficiency of your engine and typically result in reduced performance, reduced fuel economy and increased emissions.

TerraCleaning fuel injectors will remove the varnish and carbon build-up on the fuel injector tips and restore the spray pattern. It has been shown that a varnish layer as fine as 5 microns within the pintle head can restrict fuel flow through the injector by as much as 25%.

TerraCleaning Oxygen sensors, these get dirty over time from the constant flow and being in contact with carbon, soot and chemicals, which shortens their life span. When this happens they can send improper or delayed information to the cars ECU - (the brain of the vehicle) which alters the engines fuel mixture, causing poor fuel economy, poor performance and excess pollution. TerraClean has been proven and can show you proof that TerraClean can clean and extend the life of your oxygen sensors, thereby restoring fuel economy and regaining the performance.

TerraClean has and can be proven that it can help to extend the life of the catalytic converter by removing the carbon deposits from inside.